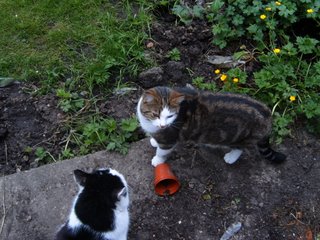 Here in the UK we are having a spell of very hot summer weather. All four of my foster-cats - Sylvester, Magic, Queenie and Janan - are enjoying spending all the time out of doors, only coming in for a food top-up every now and again!
The problem comes at bed-time! Cats love to be out of doors on these balmy summer nights. The temperature is just right, without the hot sun which they often find too hot. Not only that, but there are lots of little creatures they can hunt. They love leaping around after moths or chasing voles or fieldmice. Last night I was watching little Janan chasing a frog that was hopping around. She never caught it but she was having a great time trying, and there was no way she wanted to come inside. I usually find that at that hour, instead of running to greet me as they normally would, they deliberately elude me because they know I try to get them in at that time!
I often hear people say "Oh we always put our cat out at night". I really don't agree with them. Night-time is the most dangerous time when cats are most likely to be killed or injured on the roads. They could be caught by foxes or other wild animals. They could also wander off and get lost, if they are locked out for several hours.
My cats think I am really mean making then come in at night, but home is the safest place for them!

Cats get asthma too 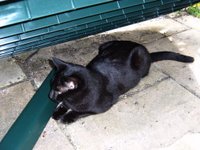 Last week one of my foster-cats, Magic (4 years old, shown above), was very under the weather. He has always been such a healthy cat but he was very lethargic and was getting very bad-tempered with the other cats, which is most unlike him. Every so often he would give a nasty cough which was also a bit like a sneeze and a bit like a retch, but without vomiting. In between times also he would do a sort of gulp.
The vets seemed to have difficulty in working out what was wrong with him. At first they said tonsillitis but when they managed to look at his throat, it did not really look inflamed. Eventually they identified fluid on his chest and gave him strong shots of anti-biotic. Now he is much better and a lot livelier.
The senior vet said he was pretty sure it was asthma caused by an allergic reaction to a specific type of pollen that is in the air at this time. Apparently the pollen count in Britain is exceptionally high this year. The condition may well be seasonal and recur at a similar time in future years.

Although we are a tiny organization, we can often find ourselves caring for literally dozens of kittens all at the same time. The other day one of my colleagues, Angie, was asked to take a litter of three new-born kittens whose mother had rejected them - poor thing, she was only a kitten herself (six months) and couldn't cope. This meant the kittens all had to be hand-fed. Angie is very good at this and loves doing it, but it is a huge amount of work. They need to be fed from something like an eye-dropper or a doll's feeding bottle - something small they will suck from. Cow's milk is NOT suitable - a special replacement formula must be obtained from the vet. In the first two weeks of life they need to be fed at least five times daily but Angie sometimes finds she is up most of the night! They often take a very long time to finish so by the time all three are done, it is time to start again!
After feeding it is necessary to clean the area under the kitten's tail with a piece of damp towelling, to stimulate it to urinate and defecate. This is what the mother would normally do, and it mimics the action of her tongue.
Sometimes despite her best endeavors, she will lose a kitten, but many of Angie's hand-rears grow up to be healthy cats!

Yesterday my next-door neighbor knocked on my door. Please could I unlock my back gate so she could come into my back yard to try to catch her cat Dixie who had come into my garden?
This happens about once a week. It can be very inconvenient as I am expected to interrupt whatever I am doing - eating, cooking, talking, watching TV, working on my computer - to go outside and unlock the gate and wait around until she (or her daughter) has caught the cat, or more usually failed to catch him.
The ridiculous thing is that Dixie is an indoor cat, i.e. he is not allowed out! All the same, he does get out regularly, but because he has not been trained to come home, they have to try to catch him. Usually he refuses to be caught. Yesterday he jumped on the garage roof and she threw a stone at him to try to drive him home.
To my mind this is a ludicrous situation. All the foster cats who come through my home have to stay indoors for at least three weeks, or until they have been fully vaccinated, whichever is the later. During that time I NEVER under any circumstances allow them to get out! At the end of the period I let them out, but for the first three or four days the outings are accompanied, and get gradually longer, until I am absolutely sure they know the way home. After this I can relax knowing they will come home and they are always in by bedtime at night. 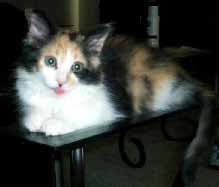 I spent the first half of today with a colleague doing a car boot sale in aid of Keighley Cat Care. If you live outside the UK, a car boot sale is something similar to a garage sale, except that you take all your stuff packed in your car boot (i.e. trunk) or van to a central point joining lots of other people. Everybody puts their stuff for sale out on the ground, or takes along folding tables to make a little stall. The sales are widely advertised so lots of people come, so you get more customers than you would at a sale in your own garage.
Keighley Cat Care is a tiny charity - there are only six of us! But last year (2005) our expenses for food and vet bills were over £27,300 (GBP)! (That is over US$51,350). Of this, more than £21,000 (over US$40,000) went on vet bills alone! Currently (June 4th, 2006) we have 29 cats in our care, waiting for their special home.

Relating to cat caring for cat

Relating to cat caring for cat: "Can a cat be kept indoors?
Again, opinions differ about this. I am giving my personal view here which is that I hate to see a cat kept indoors unless there are very pressing reasons such as health problems. A cat has two sides to his nature - the side that loves to stretch out by the fire or curl up in the best chair, and the side that likes to explore and hunt and climb trees, and just pretend he is wild! He should be allowed to express both sides of his nature unless there are vital reasons for keeping him inside. If you live in a location where it would be dangerous to allow a cat to go out, perhaps you should consider whether you should have a cat in the first place!
Of course there are cats who simply don't want to go out and live quite happily as indoor cats. And I am sure lots of people will write to me angrily and say that they won't allow their cat out after a previous pet was tragically killed on the road, and the cat is quite happy. As I say, the above is my personal view. If your cat is kept indoors, do make sure he has lots of stimulation and opportunities for exercise and play." 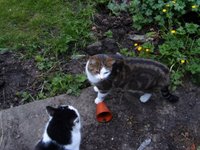 Queenie is a tabby and white cat who has been with me for a couple of months now. (The picture shows her with Sylvester.) Her owners asked some neighbors to look after her for a week, but never came back! The neighbors called Keighley Cat Care as they could not keep her. When my colleagues got there they found a filthy flat and poor little Queenie stank of cigarette smoke!
Because we were full she moved from place to place and by the time she came to me she had been in five homes in a week. Not surprisingly, the poor little cat was stressed out and didn't know where she was. She hid away in a closet for several days and wouldn't eat. On the third day I took her to the vet for her first vaccination but the vet found she had a fever and infection, so could not do the vaccination - she was given a shot of anti-biotics instead. I suspected this was due to stress. Two days later I took her back and her temperature was normal, so she got her vaccination.
Although she was no longer feverish, it was day 6 before I could get her to eat anything at all, and then all she would eat was tuna (i.e. cans of tuna from the supermarket, not cat food). After a few days she graduated to tuna flake, an "own-brand" cat food from one of our local supermarkets. This is a "complementary" cat food, not a complete cat food, but it was better than nothing. After some days I started mixing in a complete cat food with her tuna flake and soon she was just eating the complete food. However she is quite a fussy eater and every so often she demands her tuna flake again!!
Queenie is a lovely little cat, friendly to everyone, playful and affectionate. She will make a great pet for someone when she finds her special home.

I used to teach classics then spent time in West Africa, teaching and working on language and translation projects. Now I work full time as a copywriter and earning online. My Bizwrite business has now branched out into Real Estate and in particular, overseas property and this is the most exciting thing I've ever done.